Have you ever worked really hard on a project and although the project is exciting, fun and makes you feel like you’re really accomplishing something, you still have a great feeling of relief when it’s over. That is exactly how I feel today, the day after the Miles for Meso 5K race was run in Alton Illinois. Even though it’s all over and I’m really glad to have it behind me, I’m already thinking about what our race team can do to make it an even better race next year.

For those you who don’t like reading, you might want to checkout my video blog, of course the book is always better than the movie, so maybe you want to read it first then see the movie.

The entire race from planning to finish in 15 minutes

I got involved with this race 3 years ago when my “all the time” friend and “sometimes” nemesis, Terry, asked me to help out with a new race that his friend John was starting. So after speaking to John I talked to my Metro Tri Club teammates about helping out, I got club approval and the rest is now history.

So Mike Wever the club president, Terry Eldridge and I became the race management team, working with the Simmons Firm to prepare for the race. 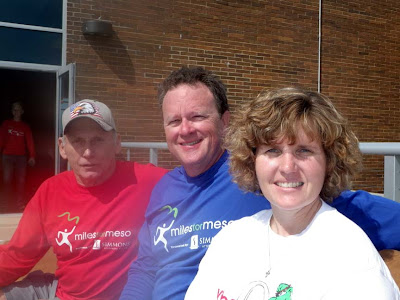 We had a fantastic group from Simmons, Theresa, Mark, Todd, and Greg ran with everything we asked them to do. Let me tell you this, we aren’t the easiest team to work with, we sent about a million emails and held tons of meetings leading up to race day, I know their heads had to be spinning trying to keep up with all the race tasks. We could have never pulled off this race without all their hard work.

After months of work, we made it to pre-race day setup on Friday. Terry and I knew that we were going need a lot of energy to make it through the next couple days, so we decided to get up early on Friday and go for a run on the infamous Pere Marquette Trail Run course. After eight miles of hills, we decided to carb up a bit before our day started. 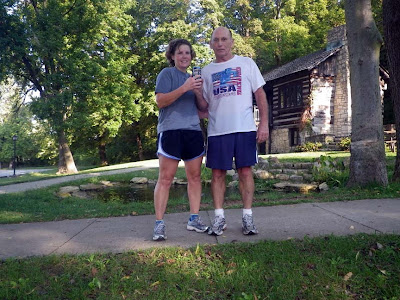 That's a Beer in our hands, we only had one, so we had to share
As we headed to Terry’s house, for a shower, Terry noticed a missed call from Mike, he was picking up a couple elite women runners from the airport. So Terry called Mike back to tell him that we would meet him at race headquarters after we stopped at his house for a shower, but just as Terry tried to tell Mike that “no, we weren’t showering together”, he lost cell service, so Mike missed that part. We really got a good laugh though.

We made it to race headquarters at about 9:30 as Mike arrived at race headquarters with Stephanie Pezzullo and Megen Duwell who, by the way, happened to finish 1st and 4th respectively with only a 12 second time difference. We took a drive around the course so the girls could give us their feedback on it. On a side note, Megan had the cutest hair, I would love to have hair like hers. Sorry, got a little side tracked, back to the race. It also allowed me to shoot some video and pictures from the back of the truck, just to get a feel for how it would be on race day. We then finished as many tasks as we could before race day because we knew we would need every minute in the morning to get ready. By 3:30 we all headed home to hopefully get some sleep before the big day. Of course if you have ever been a race director you know that sleep would not come. I laid in bed going over everything in my head, the few times I did doze off, I had nightmares about things going wrong. Finally at 5 am, I got up and headed out the door. When I reached race headquarters it was still dark, as soon as daylight hit, the volunteers started showing up.

We had tons of volunteers and we needed every one of them. I think I hit the ground running from the first step out of my car and I’m not sure I stopped until about 11 am. I think I worked harder on race day than I did running Pere Marquette the day before.

I ran around, pulling last minute details together, helping Mike when he had his arms around too many tasks and getting ready for the best part of my entire job. I was the photographer who would be riding in the lead truck taking photos, and I pulled Rick to help me monitor the video. Here is the funny thing. Rick brought his daughter, who is an Edwardsville Cheerleader to the race to volunteer and he got roped into working himself. A big thanks to Rick for stepping up when I needed him.

It was finally time to start the race, I was in the back of the truck in front of the runners, taking a few test shots, I got shots of the bikers who would lead us out and a few of the spectators waiting anxiously for the race to start. 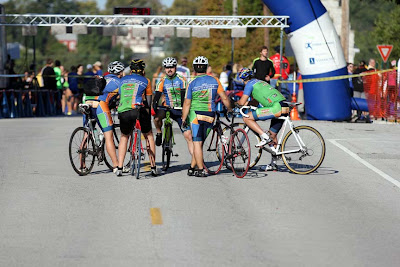 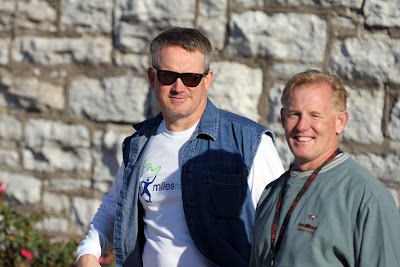 The gun went off and the race started, and it started fast. The men were racing in a tight pack and it stayed together for a really long time, it really made for an exciting race to watch. I was standing in Todd’s truck with most of my body sticking out the sunroof, and there is nothing on the roof of the truck to hang onto to, so when we hit the first corner, I went sliding to the side, it’s just a really good thing that my driver, Andy, thought quick and grabbed my legs to hold me down. He was steering with one arm and hanging onto me with the other. So every corner, he would yell corner and grab my legs. I am so grateful that I had such a great driver. I’m kind of thinking he may have been in the witness protection program though, maybe he was a get-a-way driver or something. 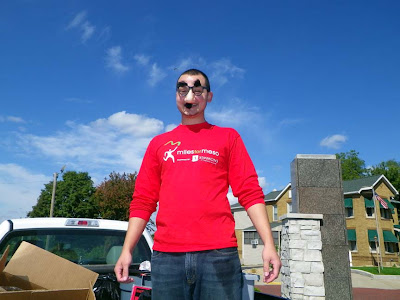 Oh boy I have to tell you this story, you see I took Andy out on a course drive before the race started to make sure he knew the course. Now I have been over this course for what seems to be a million times, but when we were driving it, I kept missing the turns. He looked at me, like I must be a real goof, I couldn't even guide him around the course and I'm a race director. And this is even funnier, you see, in 2011 me and my ROCK Racing teammate Chuck were ranked 4th in North America in adventure racing, you know where you go out in the woods and search for checkpoints with a map and compass for hundreds of miles. I know, right, how can this be, I guess all I really have to say is that it's a good thing I have Chuck or I would be lost in the woods right now.

Once again my mind wondered, let me get back to the race. I did get some really great photos of the Elite men and I also got smacked in the head by some tree branches, but don’t worry I have a pretty hard head so there was no damage. 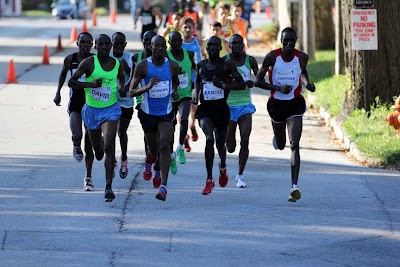 Jeff Schleicher was also on the course getting great photos of the elite women. The women's race was really exciting, Stephanie Pezzullo was leading the race almost to the finish, while Tonya Nero was gaining her, then to Stephanie's surprise, Tonya ran up next to her, so Stephanie pulled out all the stops and sprinted to the finish, winning by just a few seconds and collapsing at the finish line. Lucky for her Terry was ready to help and instantly got to her and started massaging her legs, that is until the real medical people showed up and pushed him to the side. Boy, does Terry have a good story to tell, when Stephanie makes it to the Olympics, I'm sure Terry will be telling the story about how he rubbed her legs once. 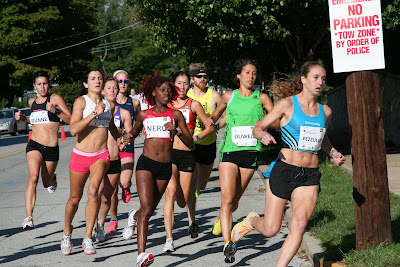 Oh sorry, I got side tracked thinking about the smile on Terry's face after that leg rub thing, so back to the men's race. On the last corner heading up to the finish line we almost got caught by Julius Koskei, who won the race. Andy hit the gas and took us to the finish where we jumped out and watched the incredible finish by Julius in 13:48, I still can’t figure out how a guy can run that fast. Rick ran the clock off the back of the truck over to the 2K finish line then finished shooting video. I hung out at the finish line long enough to see the elite women finish and then see Stephen Pifer, the 4th place finisher in the US 5K Road Race Nationals, and John Roth finish. John got the opportunity to run the race with Stephen, who helped John run a PR. Greg won the silent auction and let John run with Stephen for him. Great Job John, you made our club proud. Thanks to Stephen for coming out and helping us raise money for such a good cause. 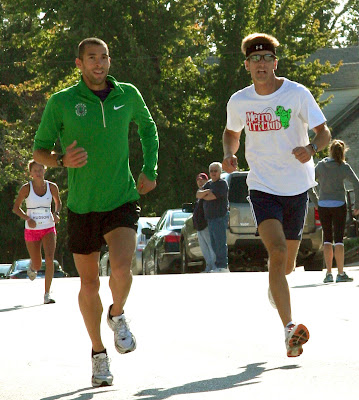 I ran over to check on the Kids Zone, where the Edwardsville Varsity Cheerleaders were working and I think they were having as much fun as the kids were. 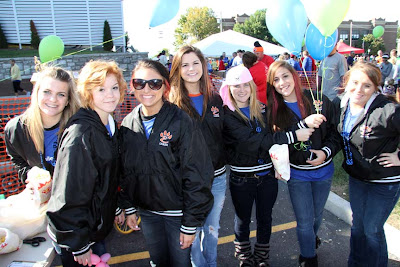 Before I knew it, it was time for the awards ceremony. We handed out awards, while only making a few mistakes, like forgetting to give out the Clydesdale category awards, but we caught our mistake before it was too late and gave them out. Those guys deserved those awards, they had some really fast times. 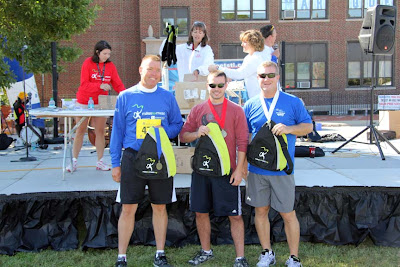 The best part of all of the awards was when a Meso survivor placed in her age group, what a perfect ending to a great event. 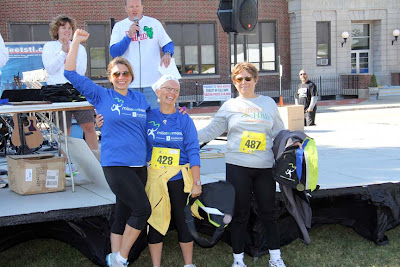 Todd, Terry and I stopped for a quick breather during cleanup then we headed to the roof for lunch and to converse about the race. It’s not enough to just be there, you also have to discuss it for the next two weeks, it’s funny, but I find myself still thinking about it and discussing it, even when it’s over. We want to hold an even better event next year. 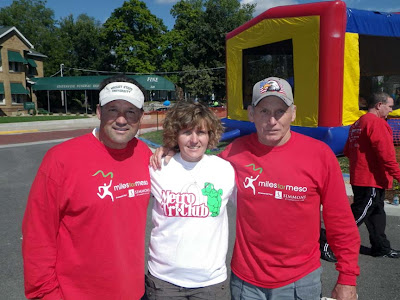 Let’s not forget why we were here, the most important part of the entire event, 25,000 dollars was raised for Meso Research, this is what makes all our work worth while. 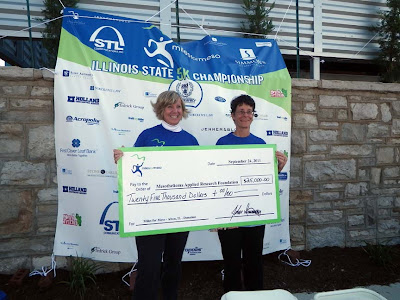 So the race was over and before we could even get a good picture the race team started to fade away. 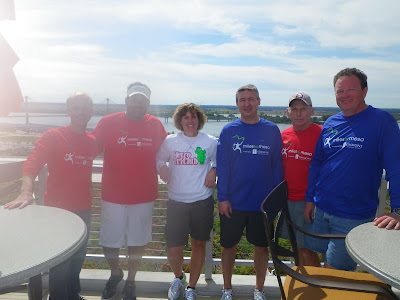 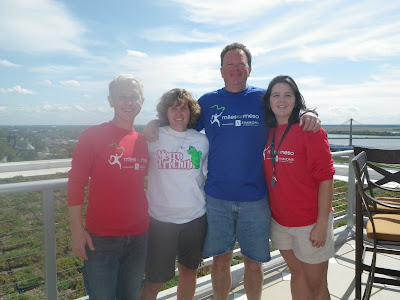 Don’t worry, we will be back next year. One last thing, a big THANKS to everyone who made this event such a success, we could not have done it without the volunteers.

And to John Simmons, Thanks for your vision that started it all.

See you all next year.

You can checkout the photos from the Elite Men’s race on Flickr, I would say they are really good, almost professional and I'm not saying that because I took them, well maybe I am.

A view of the Elite Men's race in 5 minutes
Posted by Trek Mountain Girl at 6:47 PM

Come race with us